what does "Rank" mean in msfvenom?


In the screen output below from msfvenom when listing all supported encoders with -l encoders; what does "Rank" mean exactly? 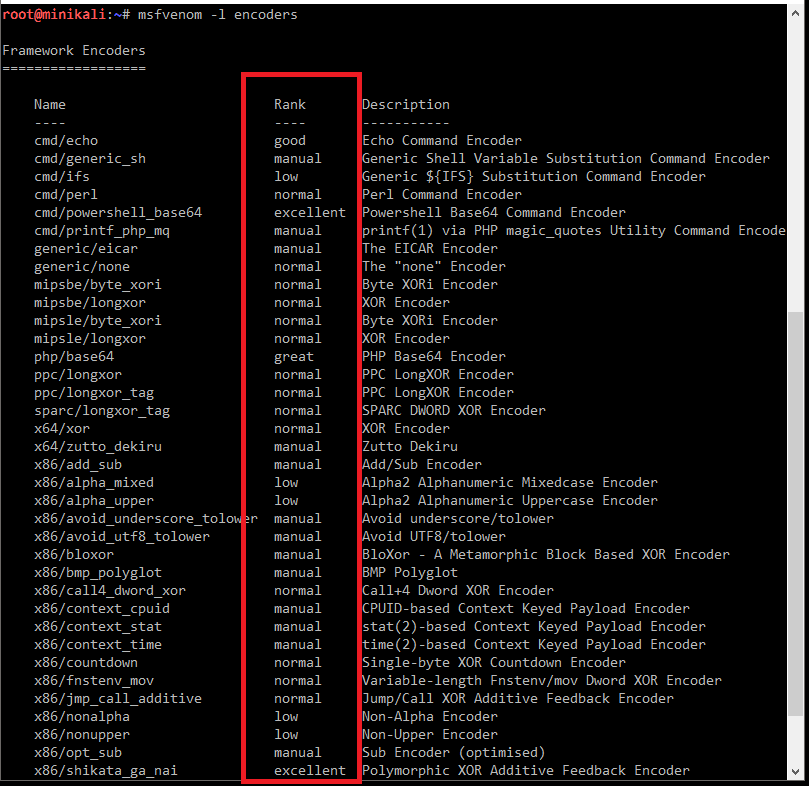 The rank refares to the potential impact on the target and is defined by the author of the module. In the case of the encoders it is carried over from the ranking system used on exploits.

MSFVenom replaced the now deprecated MSFpayload and MSFencofe utilities. However the rank gradings did not change between versions.

In 2011's eighth printing of Metasploit The Penetration Tester's Guide the following paragraph outlines how the ranking system applies to encoders;

"... the x86/shikata_ga_nai encoder, the only encoder with the rank of Excellent, a measure of reliability and stability of a module. In the context of an encoder, an Excellent ranking implies that it is one of the most versatile encoders and can accommodate a greater degree of fine tuning than other encoders."

The ranks are described as follows when referring to exploitals:

Every exploit module has been assigned a rank based on its potential impact to the target system. Users can search, categorize, and prioritize exploits based on rankings.

ExcellentRanking The exploit will never crash the service. This is the case for SQL Injection, CMD execution, RFI, LFI, etc. No typical memory corruption exploits should be given this ranking unless there are extraordinary circumstances (WMF Escape()).

GreatRanking The exploit has a default target AND either auto-detects the appropriate target or uses an application-specific return address AFTER a version check.

GoodRanking The exploit has a default target and it is the "common case" for this type of software (English, Windows 7 for a desktop app, 2012 for server, etc).

LowRanking The exploit is nearly impossible to exploit (or under 50% success rate) for common platforms.

ManualRanking The exploit is unstable or difficult to exploit and is basically a DoS. This ranking is also used when the module has no use unless specifically configured by the user