I came into work this morning and one of my BSD servers is unable to boot properly. I can get into single user mode but when running fsck I get the error "unexpected soft update inconsistency" Does anyone know either how to fix this or how I should proceed next? Thanks! 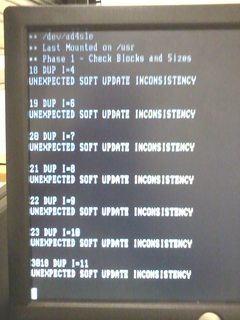 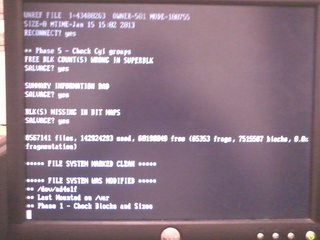 The specific problem is that I can't access my system properly. I am unsure on what the error stated above means and how to fix it. I uploaded the images of the fsck -y per the request below. Any help would be very much appreciated.

UPDATE The system came back up after a few hours of running fsck -y!! I am able to login in multiuser mode and all is good. I am going to put in a recommendation to my boss that everything be backed up. Thanks for all of your help and input everyone.

As the next three words of the error message imply, the right thing to do is run fsck manually (which you're doing).

fsck (usually run with -y so you don't have to manually say yes to all the prompts) will resolve the soft update inconsistencies and usually leave you with a working system again.
(Exceptions exist where whatever caused the inconsistency has trashed something important, like the kernel, or where the underlying cause is a dying disk.)

If fsck can't do the job you're in a position where you probably want to restore your system from known good backups. (The brave among us, and the few with skills in the arcana of fsdb may elect to attempt a manual resurrection, but restoring from backups is almost always less painful.)